A common cause of brain hemorrhage in ICU patients is an aneurysm.

A brain aneurysm is a weakness in the wall of a brain blood vessel. The vessel develops an out-pouching and can rupture and bleed.

About 50 million people in the U.S, have an aneurysm and about 30,000 will rupture and bleed each year.

15% die before ever reaching a hospital.

An brain aneurysm may start with a very small bleed. The only symptom is a headache. Usually the worst headache of your loved one's life.

A large brain hemorrhage can result in immediate loss of consciousness and sometimes death.

Symptoms such as inability to move one side vary based on the area of the brain where the blood collects.

Brain aneurysm Blood loss from a brain aneurysm is not large enough to cause death. Instead, the pressure of the blood on the brain causes the damage.

The illustration below shows a normal brain to the left. The middle panel shows an aneurysm before and after rupture., The right panel shows how the bleed in the brain would look.

Comatose patients will require a ventilator to assist with their breathing.

Until a procedure to secure it can be done, the aneurysm could bleed again, usually with devastating results.

Arrangements are rapidly made to plan an invasive procedure to prevent further bleeding.

If not at a major hospital center, which regularly treats brain aneurysm patients, transfer arrangements need to begin.

Blood pressure rapidly needs to be controlled, otherwise this can lead to more bleeding which has to be avoided.

Until a procedure can be done, most centers use medications to prevent early breakdown of the blood clots which have formed.

Continuous sedation may be necessary to control extreme agitation.

The blood already in the brain and now clotted, can increase pressure on the brain. This can cause further injury.

The increased fluid can prevent spinal fluid (CSF) from normally draining the brain. The fluid collects in areas of the brain known as ventricles.

The trapped fluid enlarges the ventricles and increase pressure on the brain. Another way to cause brain injury.

A catheter (small tube) is placed through the skull to drain off the excess fluid in the ventricle and reduce the pressure.

With brain hemorrhage from a ruptured cerebral aneurysm, two major procedures are available to prevent any further bleeding.

Neither actually aids in recovery. Both primarily prevent any further bleeding from the aneurysm.

Clipping of the aneurysm requires an operation. After opening the skull, a actual clip is placed around the aneurysm to secure it.

The clips prevents any blood getting into the aneurysm. Now, it cannot bleed again,

Coiling of the aneurysm involves threading a catheter through a vein up into the brain directly to the aneurysm.

A large number of very thin wires are then threaded in to the aneurysm sack.

The wires fill up the aneurysm and prevent any blood getting in and causing more bleeding. 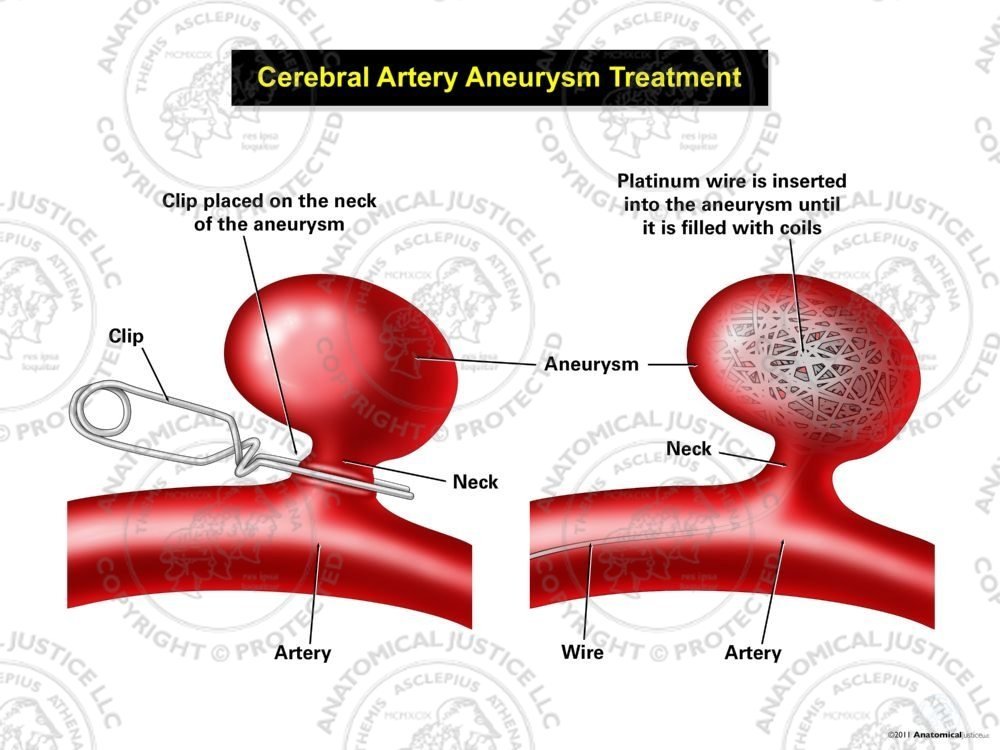 You will hear this term; ICP. It stands for Intracranial Pressure.

This is pressure on the brain from any injury such as bleeding from an aneurysm resulting in brain hemorrhage.

The pressure increases because of brain swelling as well as the clot from the brain hemorrhage. If unable to be controlled, it can cause significant brain damage which can be permanent.

A small tube is placed through the skull to monitor brain pressure(ICP).

The pressures are continuously measured and multiple medications are given to try and reduce any elevated pressures.

These measures are necessary until the swelling goes down and ICP returns to normal.

The most serious cases may require medications which induce very deep sedation, up to a week or more.

If medications cannot control the pressure, surgery may be necessary.

Usually, this involves removing a portion of the skull. The brain can expand and pressure is reduced.

The portion of the skull removed is saved. It can be replaced if and when things return to normal.

Vasospasm is a major complication of a ruptured brain aneurysm,

This problem develops in the 3 to 12 day period after the initial bleed.

It starts because the remaining blood from the brain hemorrhage irritates the other blood vessels.

In response, these vessels constrict and decrease the required. amount of oxygen and blood flow to the brain.

The vasoconstriction can cause new complications during the recovery stage.

With vasospasm your previously awake loved one will become more sleepy and less responsive.

The diagnosis uses special testing at the bedside and repeat brain scans.

Once the diagnosis is made, the doctors will give medications to drive up blood pressure to get enough blood through the constricted areas.

This will keep the other areas of the brain alive

The treatment may be necessary for as long as 3 weeks or until there is no further evidence of vasospasm.

Below,is an illustration of vasospasm. The constricted vessel reduces blood flow to other areas of the brain. This is ischemia and brain injury can develop. 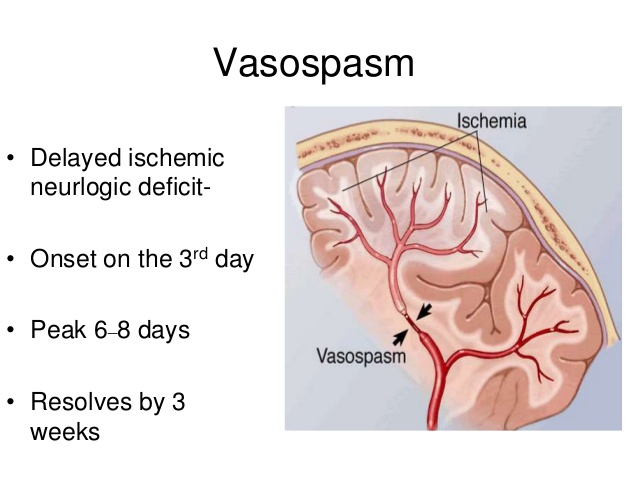 Recovery after a ruptured cerebral aneurysm is usually slow. Because of the risk of vasospasm, a 2 week 0r longer stay in the ICU is not unusual.

After hospital discharge, admission to a rehab center will very often be necessary.

For patients with a ruptured cerebral aneurysm, only about 10-20% make what we all consider an acceptable recovery including some being able to go back to work.

About 2/3 of the survivors will have a significant, permanent neurologic injury.

Unfortunately, about 35% of patients who make it to the hospital with a ruptured aneurysm do not survive.

Involvement of palliative care can be very helpful for these cases.

Questions to be Asked